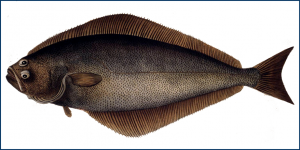 Atlantic halibut (Hippoglossus hippoglossus) have both their eyes on the right side of their bodies and swim with the right side facing the surface. They are distinguished from other flat fish in the area by the concave tail and highly arched lateral line above the pectoral fin. The largest of the flatfish in Atlantic Canada, Atlantic halibut can grow to lengths of 2.5 meters and weigh in excess of 300kg.

Atlantic halibut has ranged in the western Atlantic from off the coast of Virginia, USA in the south to the waters of Disko Bay, Greenland in the north. They are generally found in waters 200 to 500 m with larger fish found in the deep-water channels between the banks and Canadian continental shelf. Juveniles are found at shallower depths. They live near the sea floor at temperatures within a few degrees of 5˚C. As halibut grows, its food selection shifts from invertebrates to fish. Small halibut (<30 cm) feed on hermit crabs, prawns, small crabs, and mysids, while those larger than 70 cm consume flatfish, redfish, and pollock.

License holders in Eastern Cape Breton have 3 areas in which to fish — 4T (in the Gulf), 4Vn (managed locally) and 4VsW. The 4Vn Groundfish Management Board administers the fishery in 4T and 4Vn. In 2015, 4Vn was allocated 60 Tons to divide among all the interested groundfish license holders of the area (150 of which intended to fish) and into 2 seasons — Spring and Fall. 4T was fished in the Spring and Summer.

Gear: Bottom longline consists of a main line with hooks attached at intervals by snoods to shorter lengths of line that branch from the main line. The main line is weighted by an anchor at the terminal end and the hooks are baited with Atlantic mackerel, squid, or herring. Bottom longlines are considered a fixed gear — causing less harm to the environment and catching less by-catch.

Management: The fishery is managed by quota (ie. a Maximum amount of fish, by weight allowed to be caught). There are regulations on hook size, minimum size and trip limits (ie. maximum weight of catch per trip). Sanctions and penalties are applied if too many fish of other species are caught.

You can purchase a whole or dressed (head and guts removed) Halibut from a fisherman but not steaks or filets. Watch this video on tips for how to filet: https://www.youtube.com/watch?v=YOwnf5KMs3E