Imagine being responsible for managing a moose population, which includes a hunt. To do it sustainably you would need to know how many moose there are in your herd (population) and how many could be taken every year without diminishing the overall reproduction of the population. 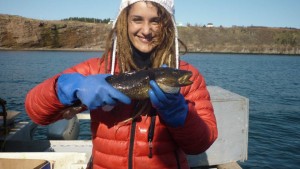 On an island like Newfoundland the task is made easier because moose cannot cross large bodies of water and the population is constrained to the island. But imagine managing moose in New Brunswick where the population is free to cross borders and mix with moose from Nova Scotia, Quebec and Maine. In situations like this where mixing of populations occurs wildlife managers need to collaborate across their borders to manage sustainably.

They also need to understand, as best they can, the biological units of the population they are managing and the spatial area or territory the population occupies.  These questions –biological units and the territory- are important for the management of the American lobster fishery. Currently management is based on zones called Lobster Fishing Areas that divide up the lobster fishery according to administrative borders.

While lobster harvesters know and respect those borders, lobsters don’t!

Do lobsters have borders? Are there physical or natural constraints like depth, water temperature or ocean currents that keep a population within certain boundaries? These are important questions that lobster harvesters and scientists are trying to answer with the help of genetics.

Genomic (or DNA) analyses are very helpful because they can identify those individuals that are more similar than others. If they are similar, it means they mix and they can be considered as part of a population while if they are genetically different, they tend to belong to isolated and differentiated populations.

In 2012, more than 600 lobsters from 17 sites were sampled. From their DNA, 10,156 genetic markers were developed. Either they have the same variation at these markers or they don’t: this indicates the reproduction and the connectivity among those 17 locations. Firstly, our results showed the existence of a regional genetic structure separating lobsters into 2 populations: south (South West Nova Scotia, Maine and Bay of Fundy) and north (Guysborough County, Cape Breton, NFLD, and the Gulf of St. Lawrence).

At a finer scale, we found 11 differentiated genetic populations inside these regions (the coloured circles on the map). As lobster’s home population (the 11 genetic populations found) is written into its genetic code, we would like to find a way to identify where a lobster comes from. Our preliminary results showed that about 80% of the lobsters that we sampled in one area were correctly identified to belong to this area. To serve as an effective fishery tool in management, traceability or marketing, the technique must be improved in order to correctly identify the origin of the lobsters.

The only sample from LFA27 — DIN (short for Dingwall) — indicates that our LFA27 “population” mixes with that of eastern PEI, the Magdalen Islands and Gaspe. These results could change the way we manage our lobster fishery, but before we do, we need more sampling to fill in the gaps. In 2015, sampling has expanded in the whole region, among them 2 more sites in LFA27 in the central and southern portions.

Besides, it is important to be aware that genetic data is only one component for defining biological units that are relevant for management actions. Other analyses like telemetry, oceanographic currents or local adaptation to one environment has to be included into the definition of these biological units. Integrating all these information to better know the biology of the American lobster is the main goal of our study.

How will the results be useful? Time will tell how they will be applied in practice (either in management, traceability, marketing or branding), but at the very least, we need more “cross border” collaboration and discussions!