Why are some clutches abnormal? 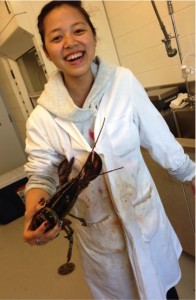 Definition: A clutch is a batch or a brood of eggs.

At sea sampling since 2011 has brought attention to berried females carrying abnormal clutches — where less than 50% of the tail is covered with eggs. As maintaining or improving egg production is a key component to maintain the lobster fishery’s sustainability, it is important to determine what factors are causing the abnormal clutches.

Last year, we selected 10 sites across eastern Canada (5 with consistently high incidence of abnormal clutches and 5 with low incidence). We collected mature pre-spawn females (that were going to lay their eggs during last summer) from these sites, and counted the eggs inside their body.  We tested if the abnormal clutches were caused by females not having enough energy to produce full clutches. We found that this is not the case.

We  selected 2 sites to collect our berried females from. One is in the Bay of Fundy and the other one is in LFA27. After the lobsters are brought into our lab, we will compare 1) their body condition, 2) number of internal eggs that are going to be spawned next year, 3) number and size of external eggs, and 4) leftover  (residual) amount of sperm in their sperm storage chamber.

Stay tuned for our results!