Modeling the Drift of Lobster Larvae

After lobster eggs hatch, baby lobsters, called larvae, are released into the ocean. These larvae spend the first 3-8 weeks or more of their life in waters near the surface and then eventually settle back to the seabed at the end of the larval phase. While floating, currents and winds can cause larvae to drift quite far, potentially over hundreds of kilometres. This means that larvae produced in one location, for example a Lobster Fishing Area (LFA), can drift to and settle in a different location than where they hatched. In my research, I am using a computer model to calculate potential drift of larvae across the species’ range. In science, a model is a simplified (but not necessarily simple) representation of reality, sort of like a scale model of a planned building that might be used in architecture. My model simulates the ocean around eastern North America, and what happens to particles representing lobster larvae released into this ocean at different times and places. It all runs automatically within a complex program, but the basic principles are fairly simple.

Many LFAs appear to retain most of their own larvae and exchange very few larvae with others, but several others may lose the majority of their larval production downstream to others, and/or receive most of their settlement from other LFAs upstream of them. LFA 27 in Cape Breton is predicted to keep and be mainly supplied by most (41-74%) of its own larvae, but does receive some settlers from the Gulf of St. Lawrence and send some larvae to areas along the Scotian Shelf, and maybe even western Newfoundland. 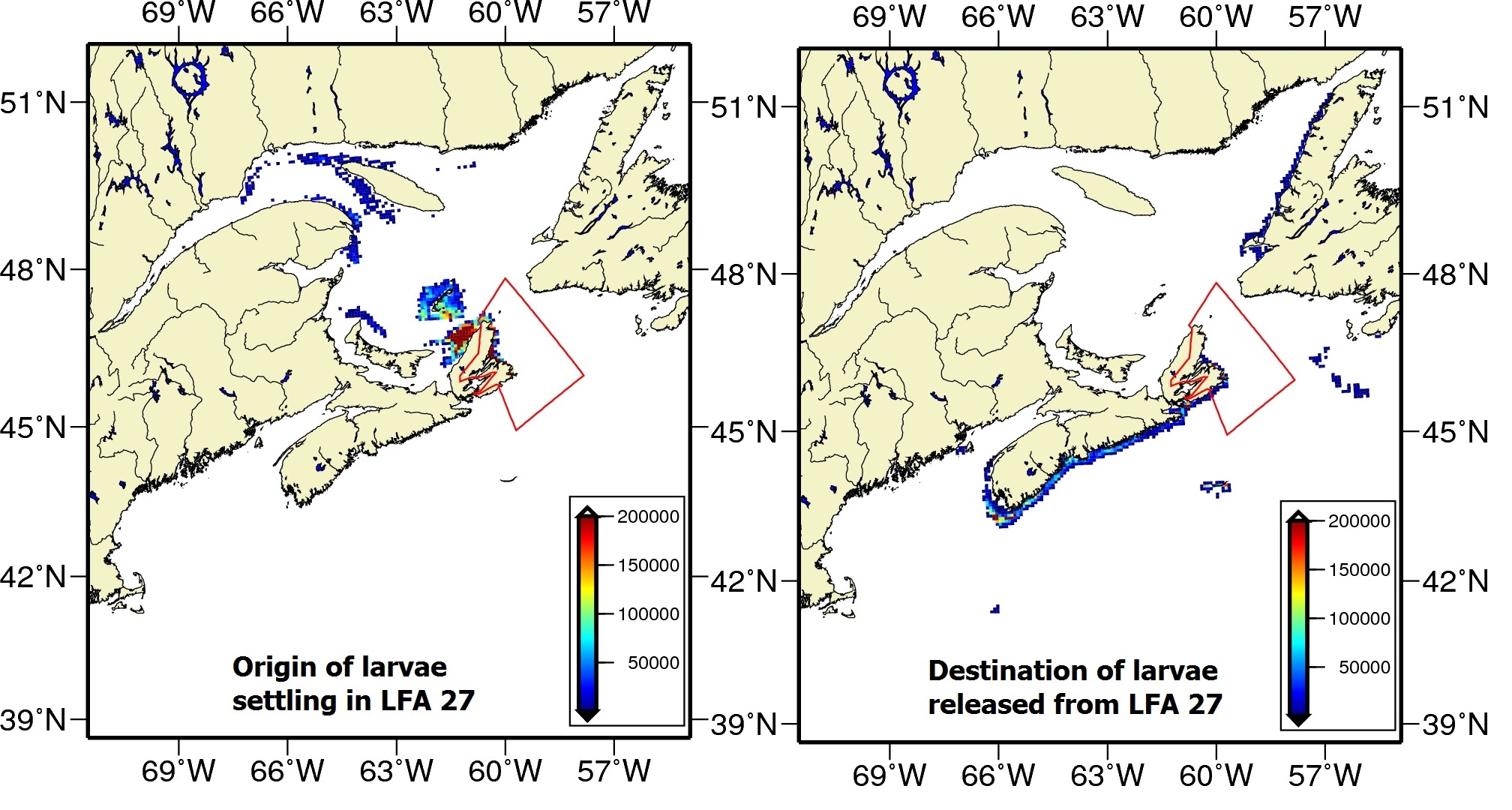 If a lot of larval drift occurs among different fisheries areas, this has important implications. For instance, an LFA that receives a large portion of its settling larvae in each year from one or more other LFAs will be strongly impacted by changes to climate and fisheries in those areas that changes their larval production. LFAs that exchanged drifting larvae would also really be parts of larger “biological units” (stocks or populations) of lobster. Both types of information need to be accounted for when assessing lobster stocks and fisheries and making predictions about future changes. This information could hopefully be used to allow lobster fisheries and the communities they support to be sustained for many years to come.

Going forward, I plan to work on adding more information on lobster biology to this model, including differences in egg production and hatch time across the species’ range, and larval swimming behaviour. I am also working on testing model predictions against real-world data (e.g., settlement) and using it to make predictions of larval drift in future climates. New information should be in my hands soon. I am eagerly awaiting the chance to add it to my model and see whether and how things change. Please stay tuned for updated results from this project!