Snow crab are found in the North Atlantic from Greenland in the northeast Atlantic and from southern Labrador to the Gulf of Maine. They prefer deep, cold-water conditions and are fished at depths from 60 to 280 m and in water temperatures of -1 to 6˚C. Canada is the world’s largest producer of Snow crab, providing about 2/3 of the global supply. Over 70 percent of exports from Canada are destined for the United States with China and Japan as other major markets. There are approximately 60 Snow Crab Management Areas in Canada spanning four DFO regions. In 2010, 4,326 snow crab fishery licenses were issued. 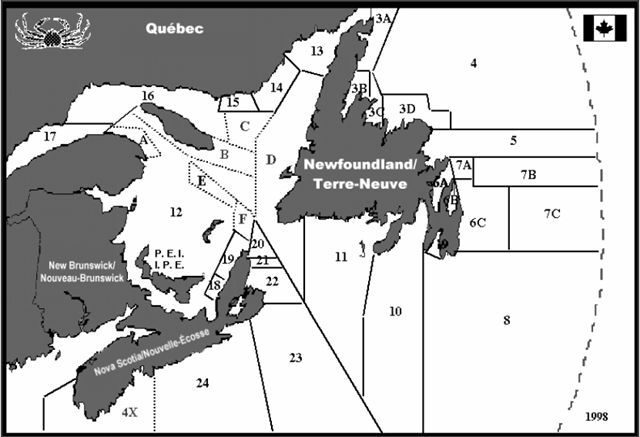 The management of the snow crab fishery is based on annual total allowable catch and quotas. Scientists at DFO estimate the population size and based on biological parameters (such as reproduction, growth rate, size at maturity, etc.) recommend a Total Allowable Catch (TAC) to industry. Each license holder is allocated a specific tonnage of crab (individual transferable quota). Other conservation measures are used to limit effort:

It takes from 7 to 9 years for males to reach legal size for harvesting. Snow crab live from about 14 to 16 years. Males can grow to a size (carapace width) of about 15 centimetres, with largest males growing almost twice as large as the largest females.

Following the imposition of groundfish moratoria in the early 1990s, and in part due to pressure from inshore fishermen to share more of the resource, temporary crab allocations were made to non-traditional crab harvesters in CFA 23. The temporary allocations became permanent in 2005. Fish harvesters with crab allocations (NOT licenses) group their allocations together and have them fished by contracted boats. Allocations were also provided to the First Nations in response to the Marshall Supreme Court decision and these were turned into permanent commercial licenses with the buyback of quota from the Temporary Fleet (2001-2002).

Science: Part of each TAC is used to fund science and associated costs such as scientific surveys, tagging of crab and data analysis through a Use of Fish policy announced by DFO in 2013. For instance of the 26 million kgs allocated in the Gulf of St. Lawrence (Area 19 included), 400,000 kg of the TAC are used to fund the science work.