Since 1993, lobster harvesters in Eastern Cape Breton have participated in research which tagged and retrieved lobster to monitor their movement and growth. The results: Lobster don’t move much from year to year. In fact the majority move less than 6 km. Therefore, applied conservation efforts do benefit the local fishery. Lobster harvesters were able to admire the growth first hand: a lobster tagged in 2012 at 0.8 lbs (0.36kg) was captured in 2015 at over 2lbs (0.9kg). Leaving that lobster in the water meant over 250% return on investment in 3 years.

By participating (and recently initiating) tagging studies lobster harvesters have seen for themselves the benefits of leaving smaller lobster in the water. They voted to increase the minimum legal size of lobster 3 times (in 1997, 2007 and 2013) resulting in quite a size difference: from 70mm (or 0.6lbs/0.27kg) to 82.5mm (1lb/0.44kg) (as shown in the photo) thus eliminating our canner fishery.

Another important benefit of leaving small lobster in the water: they will reproduce at least once (quite likely 2 or 3 times) before they are captured! Imagine the increased egg production since 1997! How does this convert to catches? See for yourself: 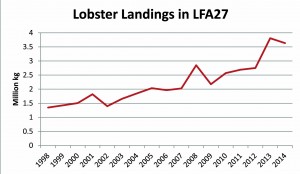 This is a sustainable product! Fishermen in eastern Cape Breton are investing in their future!