After lobster eggs hatch and leave the protection of their mother’s tail, they float to the surface of the water, where they spend 6-8 weeks drifting before settling onto the sea floor. Depending on the water temperature, wind, and currents, those lobster larvae may travel hundreds of kilometers from where they hatched. Computer models have been developed to predict the flow of larvae (called “larval drift”), but these models depend on correct biological information, one of which is timing of hatch. The warmer the water, the faster they develop through the larval stages and settle. Thus, knowing when the eggs hatch, oceanographers can use available data on the water temperature, currents, winds and storms to predict how long the larvae will drift, and to where, before settling on the bottom.

Laboratory studies, where the eggs on berried females were observed in different water temperatures, helped develop a model that predicted time of hatch in different water temperatures. Since natural conditions differ from the laboratory, my project objective is to test the model with eggs collected from lobster harvesters. If successful, we may predict the entire hatch period of lobsters living in a given location using small samples of eggs collected from as few as 50 females. This method is extremely low impact, and reduces the need for costly out-of-season sampling to determine timing of hatch. 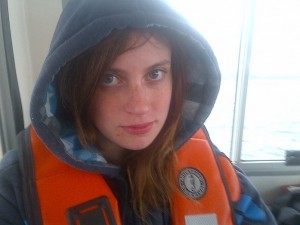 In 2012, we tried it out in Cheticamp by collecting samples of eggs over the course of the season, monitoring temperature, and then using this temperature to predict when our sampled eggs would have hatched. In order to know when hatching really occurred in Cheticamp, we sampled berried females from June to August. This pilot study suggested that the method is highly effective, and we successfully predicted 100% of the 50 day hatch period. Less than 2% of our hatch predictions fell outside of when hatching was actually observed- suggesting that this method is also very accurate.

This year, my objective is to determine if the method works as well in other locations with potentially different water temperatures: in Quebec and Eastern Cape Breton (LFA27). With the help the LFA27 Management Board team, we are monitoring hatching and collecting about 30 eggs per berried female during at-sea sampling. The eggs are then brought back to the lab, where we record how developed they were when they were sampled. Once we have temperature data for the whole summer (from temperature gauges set by fishermen), we will use it to predict when our sampled eggs would have hatched. In order to compare our hatch predictions with timing of hatch in nature, we will continue sampling after the lobster fishing season until hatching has finished.

And, even more exciting, this year we are holding some berried females in a “hotel”. Each female has her own compartment within a large, secure cage and is cared for by a volunteer fisherman and lobster technician (see picture). Eggs are collected from these females once a week and females will be released to the wild once they have finished hatching. This experiment will provide more information about hatching from the individual females, as opposed to the larger part of the study which focuses on hatch at a population level.

What is the purpose of Larval drift models?  How lobster populations are connected is still largely a mystery. By studying how different areas are connected through larval drift, we may be able to predict how changes that occur in one population of lobster could impact neighboring populations. It’s all about sustainable management of all of our lobster stocks.